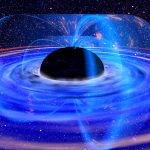 Scientists have measured the mass of a supermassive black hole with unprecedented accuracy using Astronomers used the Atacama Large Millimeter/submillimeter Array (ALMA) telescope located in Chile. The gigantic black hole weighs nearly 660 million times the mass of our Sun and it is located 75 million lights years from Earth in the center of an elliptical galaxy called NGC 1322.

“To calculate the mass of a black hole in a galaxy’s center, we need to measure the speed of something orbiting around it,” said Aaron Barth, of the University of California, Irvine, and lead author of a study published in the Astrophysical Journal Letters.

“For a precise measurement, we need to zoom into the very center of a galaxy where the black hole’s gravitational pull is the dominant force. ALMA is a fantastic new tool for carrying out these observations.”

Scientists know that black holes are very big and are very heavy, but they need to do precise calculations to measure the mass accurately. One of the astronomers explains that ALMA sees region around the black hole as the bright spinning disk in radio wavelengths and scientists explored the swirling gasses around the central supermassive black hole to get high precision mass.

ALMA has the capability to measure the radio-wavelength emitted by gas and dust molecules. Due to Doppler effect, the emission can be either shorter or longer depending on inward of outward rotation of the disk.

For measuring the mass, study authors basically examined radio-wave emissions from carbon monoxide (CO) molecules, since the CO signal is bright and readily detected with ALMA. “This observation demonstrates a technique that can be applied to many other galaxies to measure the masses of supermassive black holes to remarkable precision,” said Benjamin Boizelle from UCI.

The study appeared in the Astrophysical Journal Letters.